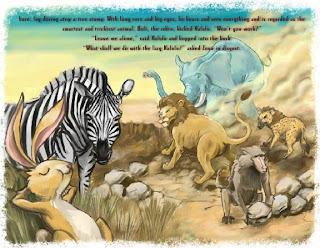 You are obviously a very learned individual. Have you found that your formal education has helped you pen folktales for kids? Why or why not? You have chosen to publish this picture book in e-format. Why did you choose that format, and would you publish that way in the future?

The goal of my writing is to share my cultural experiences with children of the world. This being the case, I thought publishing in e-format was the best way to reach a wider audience. Plus indications are that e-publishing will become a major player in the book publishing industry.

But to write for the current generation I have to do a lot of research in order to make the stories relevant to my audience. How long does it take you from story conception to publication? I have no set time.


Some stories have their own momentum and dictate the pace of every step in the process. Others require more research and therefore more time. And then there is the time the editors take to respond. So I play it by the ear. But most important, I make a timeline for those parts of the process I have control over and follow it strictly.

Do you have other folktale stories that you want to write? Do you know how many? Offhand, I have eight to ten story ideas pending in my story ideas folder. One session also included praise poetry and straightforward expository oration on matters of social concern. This same session evidenced an easy movement between these genres as well as a free mixing between men and women when it came to performance and commentary.

Historically, they dominated the region in a powerful and militaristic manner, known more for their raiding of neighbors and hegemonic assertion than for any particular economic pursuit, such as farming, hunting, or fishing. They have a rich and well-documented oral history, illustrating how they migrated into Zambia from the Luba kingdom in the Congo, then expanded in a way that brought most neighboring chiefdoms under their political domination.

Not surprisingly, the various ethnic groups involved in these interactions all have their own versions of how they relate to the Bemba and these often do not coincide exactly with the details of the bemba oral traditions. During my broader research swing through Northern Province in April through June , one of my goals was to gather stories at villages of the three senior Bemba chiefs: Chitimukulu, Mwamba, and Nkula.

Ng'andu the Member of the Central Committee for Northern Province, met with me at his provincial office in Kasama and recommended that I see several elders in his village, providing me with a rather elaborate letter of introduction. My son Daniel and I began by visiting St.

Francis' headmaster, who introduced us to one of his teachers, Mr. Kalunga, who agreed to chaperone us around.

We stopped in to see Fele, who was headman of the village nearest the school and was a member of the council of elders [ bacilolo ] who advised the Chitimukulu. Ng'andu had, in fact, included his name on the list of people I should contact. He turned out to be a gregarious man who remembered my old graduate school colleague, a Catholic nun working on her doctorate in African Languages and Literature, who had researched in the area nearly fifteen years earlier.

A bit later we traveled to the village of Chitimukulu and, stopping at the local courthouse, we were able to set up a time to come and record on the afternoon of the next day. Dismas Kampamba, who seemed to be in his mid or late sixties, had just returned from his farm in the bush and appeared to be rather tired. He wore work clothes, which included old patched trousers, a tan colored crocheted cap, a tan overall jacket and a brown short-sleeved buttoned cotton shirt with a collar. As we sat outside his verandah talking, he also recalled working with my old classmate, and this served as a good initial introduction for me.

I showed him a brief video of a talking-drum performance by the Lunda bard, Mano, recorded months earlier in Mbereshi. This seemed to interest him enough to agree to tell us a story. A person had stayed; when he stayed, this is a mulumbe, it is a mulumbe with a parable.

As he struck it with an axe like that, the thing that was there came out, Kashimweshimwe [an ogre]. He came, he did what? He came and found the children were not there. Perhaps they have gone to the west there. In the morning the honeyguide signaled his wife towards the western direction, she followed She went and even found an axe where it had stood like that.

She, too, struck the tree with an axe.

He came back from where he had gone, Fipindulule. When he came and found that person, his wife, was not there, in the morning he dressed up, he even dressed up. He even took a very big belt and fastened it round his waist, it was made of leather. Then he started going, he started going. He himself just went straight there because he knew the place. And so he found axes, the axe, he struck the tree with it. Grandfather, let go of me, I beg for mercy. He killed it, the ogre. My wife and the children? And then his children started coming out and people whom it had swallowed, all of them, came out.

When all of them finished coming out, that man, Fipindulule now built a village. He now became the chief of the village. There was a little mulumbe , it ends. Kampamba told the story while seated on the small verandah that wound round his home, leaning back with his hands resting between his slightly open thighs. He mostly used his left hand to gesture, point, and indicate action, space and direction in the narrative. He also at times mimed actions, such as when characters used the axe or when the ogre, Kashimweshimwe, grabbed and devoured various victims. Kampamba used a common gesture, tapping the palm of his right hand over the thumb and index finger side of his left fist, when indicating how tight Fipindulule tied the belt round his waist, then again to show how tightly he bound up the ogre.

He also moved his right hand over his stomach, from top to bottom, to act out the drawing of the potsherd across the belly of the ogre. He then used both hands; spread at the bottom of his abdomen, to indicate how Kashimweshimwe was split open and all the people emerged. While it is clear that the wife and children disobeyed the interdiction not to follow the honeyguide in a westward direction, there is never any admonishment of these indiscretions and the victims are in fact restored to life at the story's end.

The image of cutting open the stomach of an ogre or monster is pan-traditional in this region, found in tales from the Lamba and Tabwa, among others. After resurrecting the people in the ogre's stomach, he becomes their chief in a new village. Kampamba's performance, offered to tell a story as well. She only gave her first name, Elizabeth. She was probably in her late teens, rather tall, with very close-cropped hair.

Elizabeth wore a maroon, multi-colored citenge around her waist, over a light blue patterned, short-sleeved dress. Kampamba's place on the verandah of his house, she arranged her sleeping baby in her lap, still in the sling, and began her narrative. This made for a rather noisy atmosphere and I had a hard time initially hearing Elizabeth's responses. She was also a bit shy at first, looking down, and speaking softly.

Oh, It's all right. There is a thing [Elizabeth was speaking very softly, and some women in the audience encouraged, or maybe admonished, her to speak up] There was even a person, one. He had married women, there was Ntoole meaning: Let me pick up and Mweo Life and then Nunde Let me stick or put pieces together. Then that young man was a very skilled hunter. They had all set out to go and live at a small village.